Tirunelveli, fondly called as 'Nellai Mavattam' by the Tamil speaking population living all over the world, is an important district located in the southerly corner of the state of Tamil Nadu. The fifth largest territorial dominion in the state in terms of area, Tirunelveli was originally constituted by the East India Company during the year 1790. The urban centre of Tirunelveli is the central office of the Tirunelveli district. 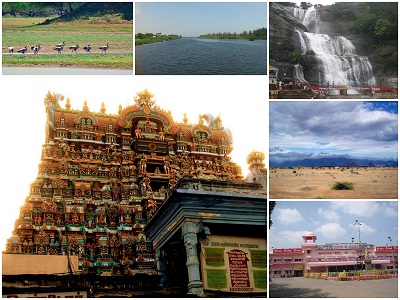 Located approximately 650 km away from the southern metropolis of Chennai, Tirunelveli is bordered by Thoothukudi district in the east, the Western Ghats in the west, Virudhunagar district to the north and Kanyakumari district to the south. Tirunelveli district is popularly regarded as one of the most significant educational hubs of South India. With a distinguishing literacy rate of 76.97% (Census 2011), that is well above of the state's literacy rate, the territorial dominion is the official address for a lot of prestigious educational institutions. Let's get to know more about the historic district of Tirunelveli in detail.


Tales behind the Name Tirunelveli

Tirunelveli was cited in the Thevaram, a 7th century Saiva literary work by Thirugyana Sambandar (one of the most prominent of the sixty-three Nayanars) as Thirunelveli. The renowned Nellaiappar Thirukovil inscriptions suggest an interesting story behind the name Tirunelveli that Lord Shiva came down as a hedge and roof to preserve the paddy field of an ardent devotee. The renowned Tamil dynasties of the Cholas and the early Pandyas named the region as Mudikonda Cholamandalam and Thenpandiyanadu respectively, while the Madurai Nayaks named it as Tirunelveli Seemai. The British mights named the city as Tinnelvelly before the region finally acquiring its archetype Thirunelveli. According to the local language of Tamil, the word Tirunelveli is actually a combination of three words, that is to say, Tiru, nel and veli which stands for Sacred paddy hedge.


Tirunelveli - Past and Present

The region of Tirunelveli was reined by various Pandya rulers and as a matter of fact Tirunelveli was Pandya kingdom's subordinate headquarters. The history of the Pandya kingdom in the area goes back to many centuries prior to the Common Era from inscriptions by Ashoka Maurya. The Pandya supremacy has even got its mention in the historical book scripted in the Pali language of the Kings of Sri Lanka known as the Mahavamsa, Varahamihira's Brihat-Samhita and so on. Many historic record evidences that the region of Tirunelveli was under the Chola Empire, governed by the Rajendra Chola the Great during 1064 Common Era. Tirunelveli continued under the Cholas till the early 13th century.

The proceeding history reveals that Tirunelveli was under the command of Vijayangara rulers, Palayakarars, Madurai Nayaks, Chanda Sahib, and the Nawabs of Arcot before falling into the hands of the British. Following the Indian independence, Tirunelveli territorial dominion was divided into Chidambaranar district and Nellai-Kattabomman district. Afterwards, the Government of Tamil Nadu determined to name each territorial dominion as per the name of the central office and the name was altered from Tirunelveli-Kattabomman district to Tirunelveli district. Click here to learn more on history of Tirunelveli 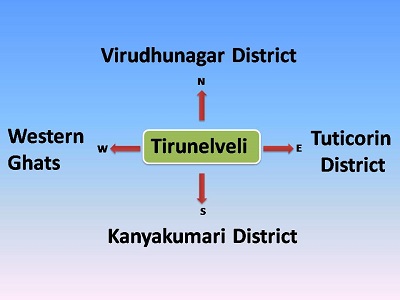 The district spread over an area of 6,823 sq km and rests between 8°05' and 9°30' of the northerly line of latitude and 77°05' and 78°25' of the easterly line of longitude. Estimating the statistical average, the natural elevation of the city is pointed at 88 meters. Furthermore, the district comprises of a stretch of the Western Ghats, a wide range of flora and fauna and protected wildlife, inland, lowland fields and mountainous forests.

Tirunelveli is regarded as a special district in the state as the region feature all the five types of ecologic zones as distinguished in the ancient Tamil Literature mountainous (Kurunji), woods (Mullai), area shaping the seacoast (Neithal), dry desert lands (Palai) and fertile land without slope (Marutham). The territorial dominion is watered by a lot of rivers springing up from the Western Ghats, and other rivers originating in the region that include  Pachaiyar River, which falls into the recurrent Tambaraparani River,  Manimuthar River, Chittar River and so on. The Manimuthar waterfalls and Kutralam (Spa of South India) are the two most important falls in Tirunelveli. Click here to learn more on Tirunelveli geography

Tirunelveli is one among the most frequented tourist destinations in the southern state of Tamil Nadu. The district is so special in its own way that it boasts a diverse topographic feature that include mountainous areas, seashore, fertile fields, rivers, lakes, low plains, woods and so on. 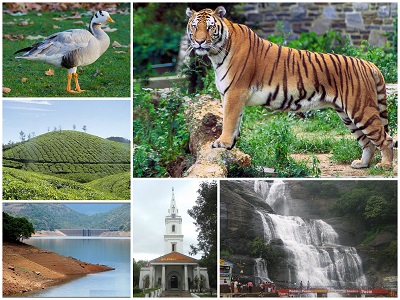 Situated along the banks of the illustrious Thamirabarani River, Tirunelveli is a tourist paradise that it has something to offer to everyone. The district is dotted with a lot of notable historic temples, tiger reserve, hills, waterfalls, bird sanctuary and many other tourist sites. The sites that are credited as must-visit in Tirunelveli feature everything that a visitor loves to see and explore on a typical vacation. Tirunelveli is sure to offer something for all kinds of visitors including nature buffs, historians, and pilgrims and so on.